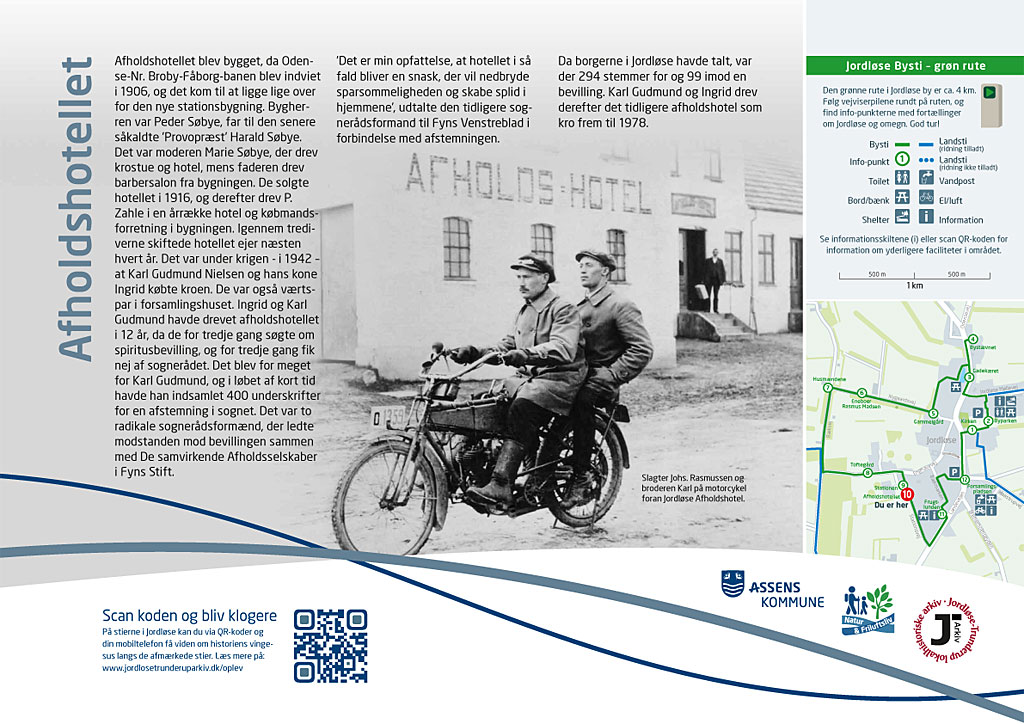 Butcher Johs. Rasmussen and his brother Karl on a motorcycle in front of Jordløse Temperance Hotel.

The temperance hotel was built opposite the new station building after the Odense-Nr. Broby-Faaborg railway was opened in 1906.
The developer was Peder Søbye, father of Harald Søbye who would become known as the “provocateur pastor”.  His mother Marie Søbye ran the inn and hotel, while his father ran a barbershop from the building. They sold the hotel in 1916, after which P. Zahle operated a hotel and grocery store from the premises for a number of years.
The hotel changed ownership almost every year during the 1930s.
Karl Gudmund Nielsen and his wife Ingrid bought the inn during the war, in 1942. They also ran the village hall. Ingrid and Karl Gudmund had run the temperance hotel for 12 years when they applied a third time for a liquor licence and were turned down a third time by the parish council.  This was too much for Karl Gudmund and he was soon able to collect 400 signatures demanding that the parish voted on the issue.
Two social liberal parish representatives led the opposition to the licence, together with the cooperative temperance societies of the diocese of Funen.

“I believe that, if so permitted, the hotel will become a dive where modesty will disintegrate and homes will be broken apart as a result” were the words of the former chairman of the parish council to the newspaper Fyns Venstreblad during the vote.

But the people of Jordløse had spoken and there were 294 votes in favour of the licence and only 99 against. Karl Gudmund and Ingrid were then able to run the former temperance hotel as an inn until 1978.