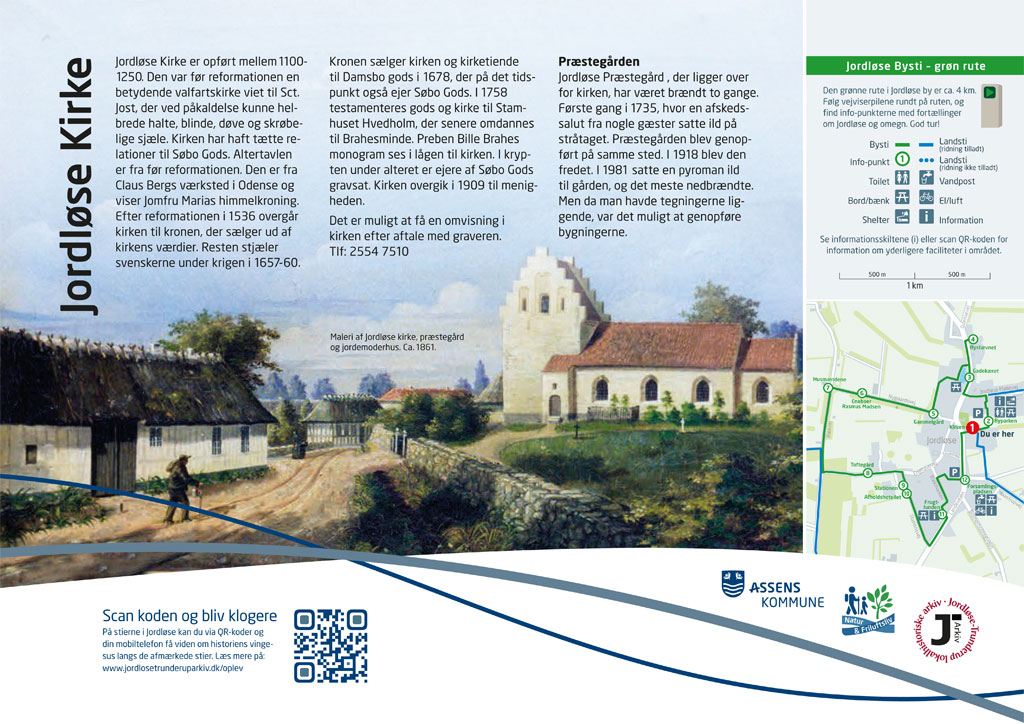 Jordløse Church was built between 1100-1250. Before the Reformation, it was an important church for pilgrimages, dedicated to St. Jost who, when invoked, could heal the lame, cure blindness and deafness and save fragile souls. The church had close links to the Søbo Estate. The altarpiece is pre-reformation. It was made at Claus Berg’s workshop in Odense and depicts the celestial coronation of the Virgin Mary. After the Reformation in 1536, the church passed to the Danish Crown, which sold the church’s valuable assets. What was left was stolen by the Swedes during the 1657-60 war.

The Crown sold the church and its lands to the Damsbo Estate in 1678, which at that time also owned the Søbo Estate. The manor and church were left to Stamhuset Hvedholm by will and testament in 1758. This would later become Brahesminde. The church gate is decorated with the monogram of Preben Bille Brahe. Former proprietors of the Søbo Estate are entombed in the crypt beneath the altar. Ownership of the church passed to its congregation in 1909. A guided tour of the church is available by agreement with the verger. Telephone: 2554 7510

Jordløse Vicarage is opposite the church and has burned down twice. The first time this happened was in 1735, when a farewell salute by a few visitors set the thatched roof alight. The vicarage was rebuilt at the same location. It became the subject of a preservation order in 1918. The second fire was in 1981 when it was set alight by a pyromaniac. Most of the vicarage burned down. This time the original plans had been archived, which made it possible to rebuild the vicarage as it was before.