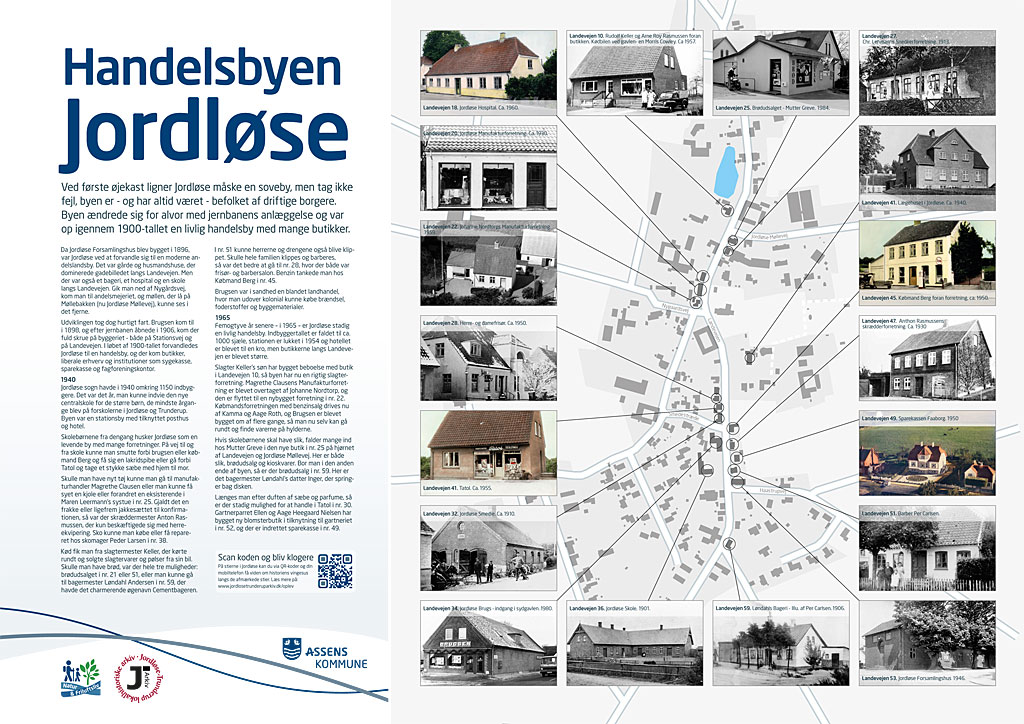 At first glance, Jordløse appears to be one of those towns where nothing ever happens. Don’t be fooled. Jordløse is and has always been populated by busy, hard-working people. Jordløse underwent major changes when the railway line was built, and during the 20th century, it became a lively market town with many shops.

The first sign that Jordløse would eventually become a modern cooperative-based village was the building of Jordløse Village Hall in1896. Landevejen, the main street in Jordløse, was predominantly farmhouses and crofters’ houses, but there was also a bakery, a poorhouse and a school. If you headed down Nygårdsvej, you would have arrived at the dairy cooperative, from where you could see the mill on Jordløse Møllevej in the distance. Developments continued to progress at a rapid rate. Grocery co-operative Brugsen opened in 1898 and the construction rate further accelerated after the railway opened in 1906, both on Stationsvej and Landevejen. During the 20th century, Jordløse was transformed into a market town with the arrival of shops, liberal professions and institutions such as medical insurance, a savings bank and trade union offices.

In 1940, Jordløse parish had about 1,150 inhabitants. This was the year that the new central school was inaugurated for older pupils. Younger pupils continued to attend preliminary schools in Jordløse and Trunderup. The town had become a station town with its own post office and hotel.

Schoolchildren from those days recall Jordløse as being a lively town with lots of shops. On the way to and from school, they were able to pop into Brugsen or grocer Berg to buy a liquorice pipe, or to Tatol to buy a chunk of soap for mum.

If you needed new clothes, you could visit clothing retailer Magrethe Clausen or have a new dress made or an old one modified at Maren Leermann's dressmaking atelier in no. 25. Menswear specialist tailor Anton Rasmussen was able to provide a new coat or confirmation suit. Peder Larsen the cobbler was the place to go if your shoes were in need of repair, or if you needed a new pair.

Master butcher Keller drove around the local area selling meat, butchery products and sausages from his van. For bread there were three options: the bread sellers in no. 21 and 51, or master baker Løndahl Andersen in number 59, who was known colloquially as “the Cement Baker”.

Gentlemen and boys could get a haircut in no. 51. If the whole family needed a cut and/or shave, it was better to go to no. 28, where there was both a hairdressing salon and barber. Petrol was for sale from grocer Berg in no. 45. Brugsen had a wide range of products for sale, from groceries to fuel, animal feed and building materials.

25 years later in 1965, Jordløse was still a lively market town. Its population had fallen to approximately 1,000. The railway station closed in 1954 and the hotel had become an inn. The shops along Landevejen had expanded.

Butcher Keller's son had built a home with its own shop at Landevejen 10, so the town now had a proper butcher’s shop. Magrethe Clausen’s clothing retail had been taken over by Johanne Nordtorp and had relocated to a newly built shop in number 22. The grocery store that also sold petrol was now run by Kamma and Aage Roth. Brugsen had undergone multiple rebuilding projects and you were now able to wander around and find the things you needed from the shelves yourself.

When schoolchildren needed candy, many would pop into Mutter Greve in the new shop in no. 25 on the corner of Landevejen and Jordløse Møllevej. Here you could buy candy, bread and newsagent-type products. For those who lived at the other side of town, it was possible to buy bread from no. 59. Here you would meet master baker Løndahl’s daughter Inger, busy behind the counter.

For those who longed for the scent of soap and perfume, these were still available from Tatol in no. 30. Market gardeners Ellen and Aage Heegaard Nielsen had built a new florist in connection with their nursery in no. 52 and a savings bank had opened in no. 49.