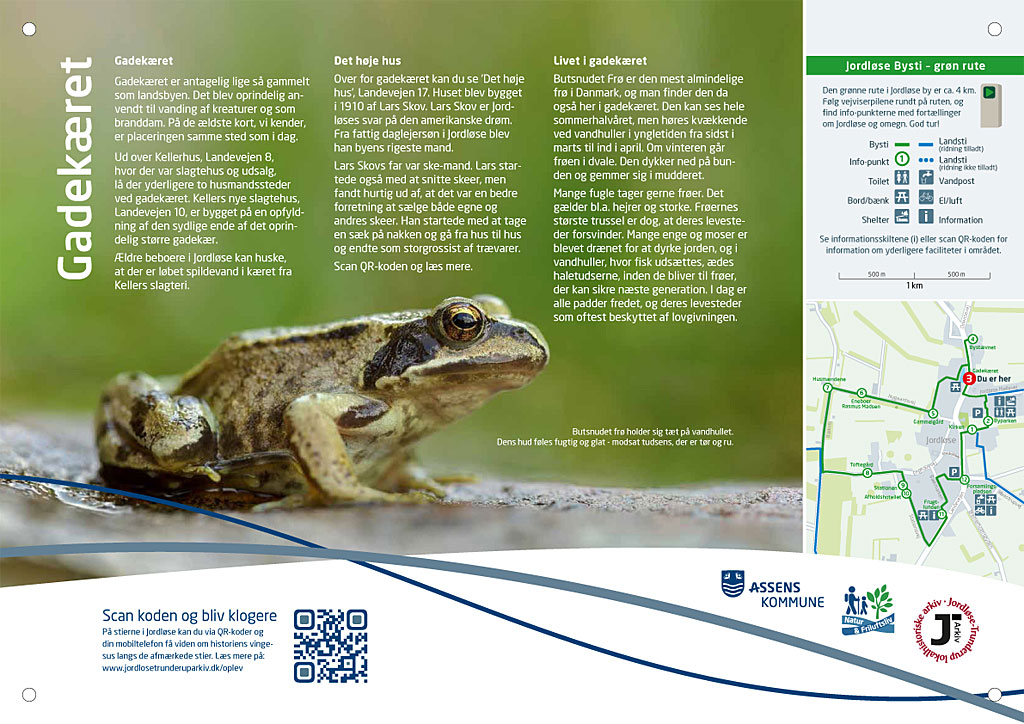 The common frog likes to stay close to the water. Its skin is smooth and moist to the touch, unlike the dry and coarse skin of a toad.

The village pond is probably about as old as the village itself. It was originally used to water livestock and as a fire pond. On the oldest maps we know about, the pond is in the same location as it is in the present day. As well as Kellerhus at Landevejen 8, where there was an abattoir and from where meat was sold, there were another two smallholdings near the village pond. Keller’s new abattoir at Landevejen 10 was built in an area of land reclaimed from what was then a larger pond at its southern end. Elderly residents of Jordløse can remember waste water flowing into the pond from Keller’s abattoir.

Opposite the village pond you can see “the tall house” at Landevejen 17. This was built by Lars Skov in 1910. Lars Skov is the Jordløse version of “the American Dream”. He went from being the son of a labourer to becoming the wealthiest man in town. Lars Skov’s father was a spoon carver. Lars also began by carving spoons but soon found out that selling his own spoons and spoons made by others was more lucrative. He began by loading a sack with things to sell and carrying it on his back from house to house, eventually becoming a major wholesaler of wood products. Scan the QR code to read more.

Life in the village pond

The Common Frog is the most common frog in Denmark. And they live here in our village pond too. You can sometimes see them during the summer months but you can hear them croaking away near ponds during their breeding season, which starts at the end of March and continues into April. The frog goes into hibernation for the winter. It dives to the bottom and hides in the mud. Many birds are happy to catch frogs. These include herons and storks. The greatest threat to frogs, however, is the loss of their habitats. Many meadows and areas of marshland have been drained for agriculture. Fish are released into ponds for anglers and eat the tadpoles that would otherwise ensure the next generation of frogs. Nowadays, all species of amphibians in Denmark have protected status and their habitats are usually protected by law.