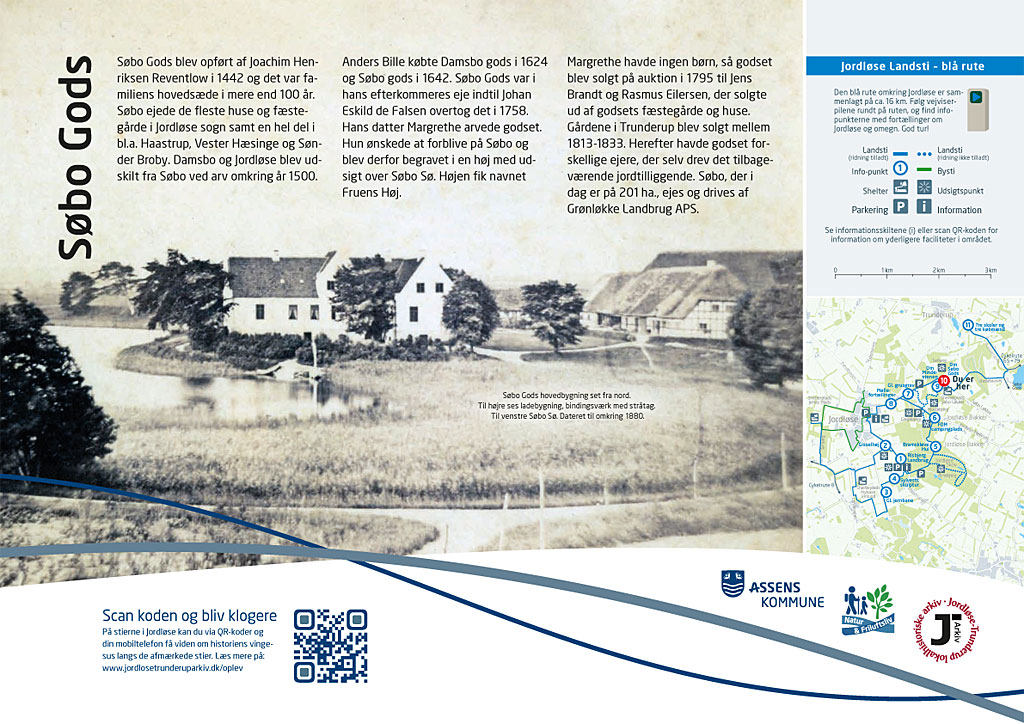 Søbo Estate’s main building, viewed from the North. To the right you can see the timbered barn with its thatched roof. Søbo lake is on the left. Dated about 1880.

The Søbo Estate was established by Joachim Henriksen Reventlow in 1442 and was the family seat for over a century. Søbo owned most of the houses and tenant farms in Jordløse parish, as well as a good number in Haastrup, Vester Hæsinge and Sønder Broby and elsewhere. Damsbo and Jordløse were separated from Søbo in about 1500, as part of an inheritance.

Anders Bille purchased the Damsbo Estate in 1624 and the Søbo Estate in 1642. Søbo remained the property of his descendants until it was taken over by Johan Eskild de Falsen in 1758.

The estate was inherited by his daughter, Margrethe. She wished to remain at Søbo and was therefore buried on a hill overlooking Søbo lake. This hill was named “Fruens Høj” (Madame’s Hill).

Margrethe had no children so the estate was sold at auction in 1795 to Jens Brandt and Rasmus Eilersen, who sold off the tenant farms and houses belonging to the estate.

The farms in Trunderup were sold between 1813 and 1833. Subsequently the estate had various owners, who farmed the remaining land themselves. Søbo now has 201 hectares of land and is operated by Grønløkke Landbrug Aps.