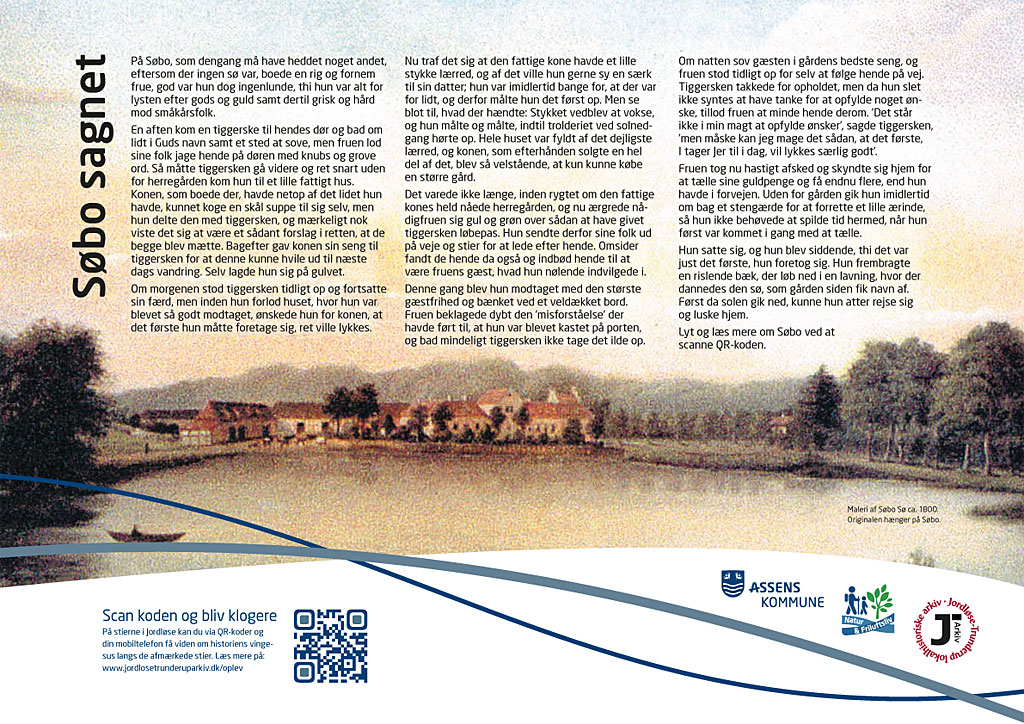 Painting of Søbo lake, approx. 1800. The original painting hangs at the Søbo Estate.

The legend of Søbo Lake

Søbo means “the home by the lake” so this story goes back to a time when Søbo must have been called something else, as there was no lake. In those days a fine lady lived there. Fine and wealthy she may have been, but good she most certainly was not. Her interest was only in wealth and gold and she was cruel and mean to those who had little of either.

One evening a beggar woman came to her door and asked for a little food and somewhere to sleep by way of godly kindness, but the lady bade her staff to shove her away from the door and sent her on her way with unkind words.

In the morning, the beggar woman rose early and proceeded on her way. Before leaving the hovel where she had been treated so kindly, she made a wish for the peasant woman that the first thing she tried to do would be a fine success.

It so happened that the peasant woman had only a small piece of linen and she wanted to sew a shift for her daughter to wear.
She worried there might not be enough material, so she measured it first.  But guess what happened! The piece of linen continued to grow and grow and she measured and measured until the spell ran out at sunset.
The hovel was now full of the finest quality linen and the peasant woman was able to sell so much of it that she became wealthy enough to buy a big farm of her own.

Soon after, rumours of the peasant woman's remarkable luck reached the manor house. And the miserly lady that lived there was now kicking herself for having sent the beggar woman away. So she sent her servants out to search the roads and lanes to try and find her. When they eventually did find her they invited her to attend the lady’s house as a guest, which she accepted with some reluctance.
This time she was welcomed with great hospitality and was seated at a table that was heaving with food. The lady offered her deepest apologies for the “misunderstanding” that had led to her being thrown out of the gate and pleaded the beggar woman not to take offence.

That night the guest slept in the best bed in the manor house and the lady got up early to follow her on her way. The beggar woman thanked her for her stay, but as she seemed not to be minded to fulfil any wishes, the lady took the liberty of reminding her to do so.
“It is not in my power to fulfil wishes” said the beggar woman. “But perhaps I can make it so that the first thing you try to do today will be a fine success.”

The lady quickly said her farewells and hurried home to count her gold and see if she had even more than she had already.
Outside the farm, however, she popped behind a stone wall to do something she didn't want to have to waste time doing once she had started counting all her money.
So she squatted and stayed squatting, as this was the first thing she had tried to do. And from her nether regions she brought forth a bubbling brook that ran into a hollow and eventually formed the lake from which the estate then took its name. It was not until the sun went down that she was able to stand up again and make her way home in shame.